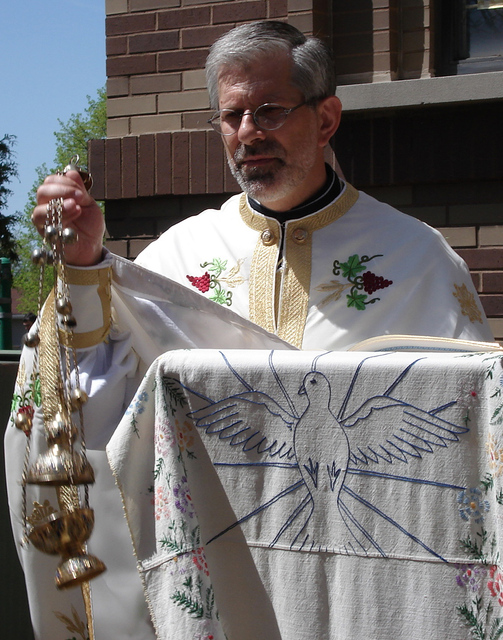 Very Reverend Stavrophor Father Dragoljub was born on May 10, 1958 to his parents, late +Milovan and Mara Popovic, nee Maksic, in Majevac, municipality Doboj, Diocese of Zvornik – Tuzla, Repulika Srpska. (The Popovich family has been giving the Serbian Orthodox Church priests and bishops for almost four hundred years). He received his elementary education in his birthplace and graduated from St. Sava seminary in Belgrade in the Class of 1979. On September 16, 1979 he entered into Holy Matrimony with Miss Milena Tomic. On St. Thomas Day, October 19, 1979, he was ordained in the rank of a deacon. On the following day, the day dedicated to Holy Martyrs Sergius and Bach, he was ordained a priest by the of blessed memory Bishop + Sava of Shumadija.
Father Dragoljub was assigned to the Parish of St. Nicholas in Sakule near Belgrade, Diocese of Banat on November 1, 1979, where he served through May 15, 1981. It is in this parish that first child, Dusan, was born. Due to the need of the church, he was transferred to St. Archangel Gabriel parish in Izbiste. Father Dragoljub served there through September 30, 1989. It is in this parish that his second child, Marina, was born. During his tenure at this parish, under his leadership, the church was completely renovated both inside and outside. At the same time Father Dragoljub was administering the parish of Ascension of our Lord in Potporanj where he together with parishioners renovated the church and built a parish house. In October of 1989, Father Dragoljub with wife Milena and children Dusko and Marina emigrated to the United States of America and lived with his sister Ljuba Boskovich and her family in Schererville, Indiana. In December of 1989, he was appointed to St. George the Great Martyr parish in Cincinnati, Ohio, New Gracanica Metropolitanate, where he served through October 31, 1994. Here, Father Dragoljub started many projects, which eventually lead to the building of a new beautiful Social Hall. In October of 1994, Father Dragoljub was transferred to St. Simeon Mirotochivi in South Chicago, Illinois where he served through April 30, 1999. In this parish, Father Dragoljub again organized his parishioners to help beautify the church. The interior of the church was painted and many Icons and other Church articles were donated to the church. The existing Social Center was also expanded adding two beautiful classrooms for a larger Sunday school and a church office. On May 1, 1999 he was elected and appointed to be a permanent priest at St. George the Great Martyr parish in Schererville, Indiana, Midwestern Metropolitanate, where he is presently serving. On February 3, 2008, during the Hierarchical Liturgy served in our St. Gerorge the Great Martyr Church and on the occasion of St. Sava School of Theology Celebration, His Eminence Metroplitan Christopher elevated Fr. Dragoljub into a rank of Stavrophor.

In June of 2008, Fr. Dragoljub with his wife protinica Milena moved to Austin, Texas with desire to be closer to their children Dusko and Marina as well as to start-up a new Serbian Mission Parish in Austin.

Donate to Our Parish